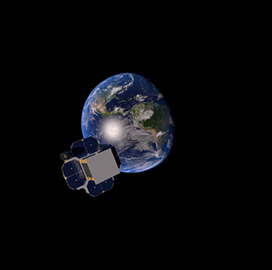 NASA’s CAPSTONE Marks Another Milestone in Journey to Cislunar Orbit

A National Aeronautics and Space Administration CubeSat designed to test a unique lunar orbit is firmly bound for its intended destination on board the Rocket Lab Photon satellite bus, mission officials announced. A series of burns made by the Photon has put the Cislunar Autonomous Positioning System Technology Operations and Navigation Experiment CubeSat onto a ballistic lunar trajectory, SpaceNews reported Monday.

Rocket Lab launched the CAPSTONE mission on behalf of the American space agency on June 28 from a launch complex located in New Zealand’s Mahia Peninsula. The spacecraft is heading toward an orbit intended in the future for a lunar space station, to be named Gateway, which will be built with commercial and international partners in support of the Artemis program, according to NASA.

In a statement, Brad Cheetham, chief executive officer of Advanced Space, said that getting to this point has taught his company’s technicians much, readying them to “execute their unique expertise for this monumental moon mission.”

Advance Space is set to take over operations of the CAPSTONE lunar orbiter, a 12U CubeSat built by Terran Orbital. The NASA-funded mission will enter a near-rectilinear halo orbit around the moon to test the stability of that orbit ahead of future manned lunar missions. Insights gleaned from CAPSTONE will also inform the launch of the Gateway space station, which will permanently sit in cislunar orbit, serving as a midway between Earth and the moon.

Meanwhile, Peter Beck, CEO of Rocket Lab, said CAPSTONE’s success signals low-cost access to not only the moon but to asteroids and other planets in the solar system.