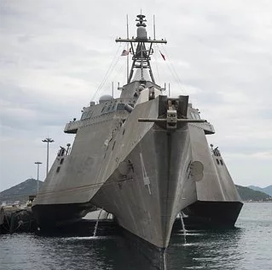 The Navy has formed a task force focused on increasing the reliability of littoral combat ships that have been affected by material defects.

Task Force LCS is currently working on addressing five reliability issues on Freedom-variant ships and four more on Independence-variant ships that have resulted in the most lost operational days.

According to Vice Adm. Roy Kitchener, commander of naval surface forces, the flawed parts on the warships have cost the Navy hundreds of days of operations, Defense News reported Tuesday.

The developer of the defective combining gear, German firm RENK, has worked with Lockheed Martin to develop a fix. The modified parts have completed ground-based testing and are set to undergo sea-based testing.

Other reliability issues on the Freedom-variant warships were found on parts related to the diesel generator rigid mount, fuel lines, water jets and boat davits.

Kitchener expects to see improvements in the LCS fleet’s reliability in the next two years. Within that time frame, he anticipates that the warships will be able to better meet operational commanders’ requirements.

In the long-term, he hopes to deploy an LCS fleet that can help deter high-end adversaries like China and Russia. The goal, Kitchener said, is to have 31 ships by 2026.