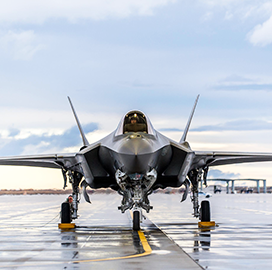 The Navy intends to award Lockheed Martin Aeronautics a sole-source contract for the installation of flight test instrumentation on F-35 test aircraft.

The contract requires the company to provide engineering integration support and hardware kits as part of the installation process. Work under the proposed contract supports F-35 technical refresh 3 requirements, according to a solicitation notice posted on SAM .gov.

Lockheed Martin Aeronautics is expected to perform contract work in its facility in Fort Worth, Texas.

The company was deemed the only source capable of fulfilling the contract requirements since it is the sole designer, developer, manufacturer and integrator of the F-35 aircraft and the related equipment.

It was also identified as the only company that possesses the required expertise, skills and software/algorithms to furnish the supplies and services within the Navy’s required timeframe.

The Navy is one of the primary users of the F-35. The service branch is looking to deploy F-35s as the primary offensive fighter for aerial defense and close air support for its carrier strike group.

The F-35C, which is operated exclusively by the Navy, is a long-range stealth strike fighter designed and built explicitly for aircraft carrier operations.

The Air Force uses the F-35A variant, which is designed to operate from conventional runways, while the Marine Corps operates the F-35B short takeoff/vertical landing variant.