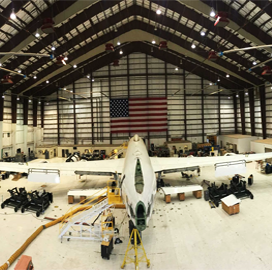 The U.S. Navy has awarded Northrop Grumman its five-year, $111 million Integrated Modification and Maintenance Contract for the E-6B Mercury aircraft.

Northrop will modernize the E-6B’s command, control and communications functions that connect the national command authority with the United States’ Nuclear Triad. The company would also set up a consolidated construction line for core modifications and could accept additional modifications and select depot maintenance tasks.

Work will be performed at the company’s Aircraft Maintenance and Fabrication Center in Lake Charles, Louisiana, Northrop said Thursday.

The E-6B Mercury transmits and receives secure and non-secure voice and data information. It delivers resilient C3 services in support of the U.S. president, the secretary of defense and the U.S. Strategic Command.

The aircraft is based on the Boeing 707 commercial aircraft. It is powered by four CFM-56-2A-2 engines that allow the aircraft to fly above 40,000 feet at speeds of around 522 knots.

The aircraft is capable of performing the “Take Charge and Move Out” mission and airborne strategic command post missions. It is also equipped with an airborne launch control system, which can deploy U.S. land-based intercontinental ballistic missiles.

Northrop Grumman offers science and technology products and services in support of the Department of Defense and all its components. It supports all military domains from sea to space and cyber.