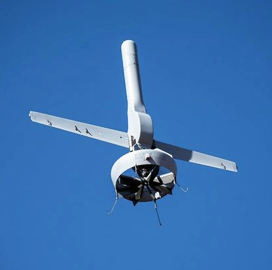 Northrop Grumman and Martin UAV have completed the flight test of a V-BAT unmanned aircraft system that features new capabilities.

During the demonstration, which was held at Camp Grafton in North Dakota, the VBAT showcased its GPS-denied navigation and target designation capabilities, among others, Northrop said Wednesday.

The enhanced V-BAT provides a near-zero footprint, flexible vertical take-off and landing capability based on a platform that is currently deployed and operated by military users, according to Kenneth Todorov, sector vice president and general manager for Northrop’s global sustainment and modernization.

In a statement, Todorov also noted that the V-BAT UAS addresses the Army’s FTUAS mission. For the program, the Army wants to develop a “rapidly deployable, GPS-denied navigation-capable, expeditionary VTOL system” that can support persistent aerial reconnaissance, which is required by Army brigade combat teams, ranger battalions and special forces.

The recently tested system is based on Martin UAV’s VBAT UAS, a compact, lightweight system that can be set up, launched and recovered by two soldiers in a confined environment, Northrop said.

Northrop’s partner in the effort, Martin UAV, is a company that was recently acquired by Shield AI.

The acquisition of Martin UAV will enable Shield AI to rapidly develop GPS-denied and autonomy capabilities for V-BAT through the future porting of Shield AI’s Hivemind autonomy stack onto the V-BAT, Northrop stressed.

Posted on September 3, 2021 by Andrea McHale