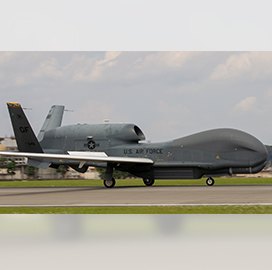 Pentagon to Use Global Hawk Drones for Hypersonics Testing

The Department of Defense is completing the transfer of 24 retired RQ-4 Global Hawk unmanned aircraft systems as part of hypersonic weapons testing.

The Global Hawk drones are part of the SkyRange program, where the Pentagon will use drones to test hypersonic platforms. The DOD believes that using drones can increase the frequency and flexibility of testing.

George Rumford, the acting director of the Pentagon’s Test Resource Management Center, said in an interview that SkyRange is designed to meet the goal of having one flight test per week. The target was introduced by Mike White, the department’s director for hypersonics, C4ISRNET reported.

According to Rumford, using UAS platforms allow officials to have more dynamic tests because the target is airborne. The Pentagon usually does hypersonics testing using ships, which entails delays due to maintenance or availability concerns.

Rumford said drones can be outfitted for testing in a matter of hours, unlike ships, which can take around three weeks to prepare. The acting director also noted that UAS platforms can provide better testing data because they can fly closer to the hypersonic flight path.

The RQ-4s are expected to be ready for testing by 2024. Preparations that need to be done to the aircraft include sensor and instrumentation suite installation and avionics modifications.

In addition to the RQ-4s, Rumford said TRMC is looking to use retired MQ-9 Reapers for SkyRange. The test team is working with MQ-9 manufacturer General Atomics to explore ways to outfit the Reaper for the program.