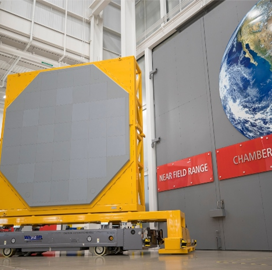 Raytheon Missiles & Defense has secured a potential five-year, $3.15 billion contract for full-rate production of the AN/SPY-6(V) family of radars. The base award is a one-year contract worth $651 million, while the four one-year options are worth $2.5 billion in total.

Raytheon will produce solid-state, fixed-face and rotating SPY-6 variants that will provide integrated air and missile defense capabilities for Navy ships. The equipment is expected to support the military branch for the next four decades.

SPY-6 will give the Navy’s surface fleet advanced electronic warfare protection and enhanced detection capabilities. The component is already installed on the USS Jack H. Lucas, the service’s first Flight III destroyer that is expected to be operational in 2024.

The array radar variants have between nine and 37 radar modular assemblies. The RMAs allow SPY-6 to be scalable and modular and gives the U.S. and its partners the ability to support various missions.

Raytheon Missiles & Defense is a Raytheon Technologies business that offers air warfare; unmanned aerial system defense systems; hypersonics; and land, missile and naval warfare services. It is headquartered in Arlington, Virginia, and has offices in Australia and the United Kingdom.