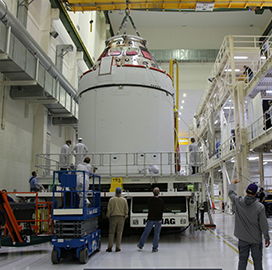 Redwire Corporation announced that it has successfully delivered the first set of wired cameras for Artemis III as part of its production contract with Lockheed Martin for the Orion camera system. The system comprises an array of internal and external inspection and navigation cameras developed for the National Aeronautics and Space Administration’s Orion spacecraft, Redwire said Tuesday.

Redwire said it is responsible for the production and testing of the camera and video system hardware for the Orion spacecraft, specifically 11 of the spacecraft’s 13 cameras. The delivered camera system makes use of commercial off-the-shelf hardware that has been engineered to operate in the space environment to provide high-performance video, still imaging and optical navigation capabilities.

Redwire further explained that the 11 internal and in-vacuum cameras that make up the camera system include wireless cameras positioned on each of Orion’s four solar arrays, allowing in-flight inspection of the entire spacecraft from the docking hatch to the main engine. The system also includes an optical navigation camera, which utilizes machine vision to determine Orion’s position and velocity relative to Earth.

Orion is a class of partially reusable crewed spacecraft to be used in NASA’s Artemis program. The spacecraft consists of a Crew Module space capsule designed by Lockheed Martin and the European Service Module manufactured by Airbus Defence and Space. It is built “to take humans farther than they have ever gone before,” NASA said.