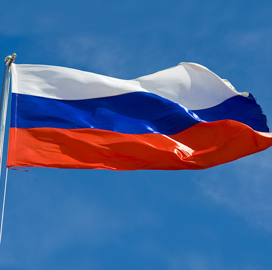 U.S. military officials said that Russia’s Nov. 15 demonstration of its ability to destroy satellites is “not a surprise.”

During the test, Russia used a ground-based weapon to blow up one of its own defunct satellites, sending an estimated 1,500 pieces of debris into orbit.

Rep. Jim Cooper, the chairperson of the House Armed Services Committee’s subcommittee on strategic forces, said that Russia has already conducted similar tests in the past that failed. He said it was predictable that Russia would eventually hit its target.

Vice President Kamala Harris and the National Space Council that she chairs have condemned the missile test, saying that the blast endangered the satellites of other nations and the astronauts in the International Space Station.

Harris said at the NSC’s inaugural meeting that all space-faring nations should exercise responsibility, Politico reported.

“We must expand rules and norms on safety and security, on transparency and cooperation, to include military, commercial and civil space activity,” Harris added.

The White House has also released a framework detailing the United States’ top space priorities. The framework states that the government wants to accelerate its establishment of a stronger national security space posture.

The United States also wants to “strengthen its ability to detect and attribute hostile acts in space,” the framework read.

Posted on December 6, 2021 by Robert Johnson