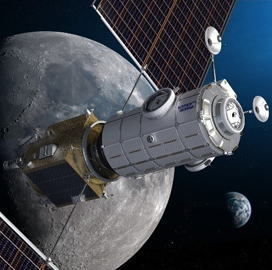 Space Force leaders are exploring how to best protect space-based assets and the emerging space-based economy in the coming decades, a senior military scientist told SpaceNews in an interview.

Prior to the interview, Mozer and other military space leaders met at Peterson Air Force Base in Colorado Springs to discuss the Space Force’s vision through 2040.

The workshop’s participants shared their views on how government policies and industry investments can drive the United States’ future in the emerging space domain.

The chief scientist said he expects the Space Force to eventually play an important role in all aspects of national power, including non-military areas.

Mozer expects a report on the workshop to be released within a few months. A similar report was released in September 2019 pertaining to a 2018 workshop hosted by the Air Force Space Command.

The Intelligence Community published a report in April predicting that China will become the United States’ most significant rival in the space sector by 2040.

In its latest Global Trends report, the National Intelligence Council said that China will likely pursue home-grown space technologies independent of those developed by the United States and Europe.

The council expects the U.S. military to be a strong driver of advancements in mission-critical space capabilities due to the threat of space-based services being denied in conflict.