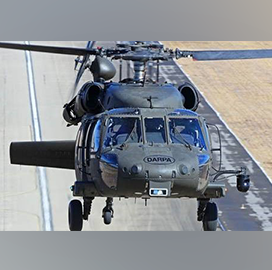 Sikorsky announced that one of its early model UH-60 Black Hawk helicopters has flown without a pilot. The converted helicopter’s unmanned flight on Saturday marks the first successful test of the Aircrew Labor In-Cockpit Automation System, a program of the Defense Advanced Research Projects Agency, C4ISRNET reported Wednesday.

For about 30 minutes, the ALIAS-equipped Black Hawk flew without anyone inside over Fort Campbell in Kentucky on Saturday and then again on a shorter flight on Monday. DARPA and Sikorsky, now a Lockheed Martin subsidiary, have been flight testing the ALIAS for roughly six years but have always had a pilot in the aircraft just in case the helicopter’s link with the remote pilot is severed.

Igor Cherepinsky, director of Sikorsky Innovation, told reporters during a press briefing after the flight that the aircraft performed pre-flight checks, took off and ran through a simulated Light Detection and Ranging system simulating the rows of tall buildings in the New York City skyline. The seven-ton aircraft responded autonomously to the simulated skyscrapers before landing safely by itself.

In addition to ALIAS, the experimental UH-60 uses the Sikorsky MATRIX autonomy system designed to help pilots and aircrew when flying in degraded environments. Army pilots first tested the MATRIX system in 2018 in an effort to develop conventional helicopters that can also be flown autonomously when needed.

With the introduction of DARPA‘s ALIAS, a much higher level of automation can be integrated into aircraft that are otherwise flown by onboard pilots. ALIAS aims to support the execution of an entire mission from takeoff to landing, Sikorsky said in a statement.