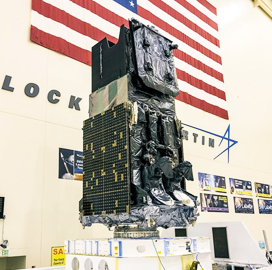 The Space Force has launched the SBIRS GEO 5 satellite via an Atlas V rocket that lifted off from Cape Canaveral Space Station in Florida.

SBIRS GEO 5 achieved geosynchronous orbit on May 18, making it the fifth and penultimate addition to the Space Based Infrared System constellation, which was designed for early missile warning.

The satellite will be subject to a six-month testing period before it can be fully operated by the Space and Missile Systems Center, C4ISRNET reported.

All SBIRS satellites were developed by Lockheed Martin.

SBIRS GEO 5, along with the sixth satellite, which is still under development, will replace the first two SBIRS satellites.

Originally, two more replacement satellites were in the works. Plans for a seventh and eighth SBIRS satellite were scrapped in 2018 as the Department of Defense set its sights on a new satellite constellation.

The proposed Next Generation Overhead Persistent Infrared satellites will eventually replace SBIRS. The new constellation, which is intended to serve as early warning systems for ballistic or tactical missile launches anywhere on the globe, is slated to be delivered in 2025.

Lockheed Martin is currently under contract with the Space Force to build the first three Next Gen OPIR GEO satellites.