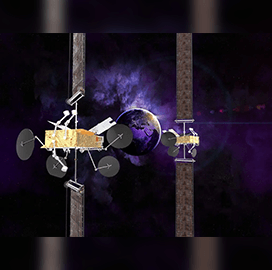 Space Force to Focus on Designing More Resilient Architecture in 2022

The Chief of Space Operations said Tuesday that the Space Force will focus much of its efforts in 2022 designing the military’s future space architecture. Speaking at a Mitchell Institute for Aerospace Studies event, Gen. John Raymond vowed that in 2022, America’s newest military service will be “more consequential” than during the first two years of its existence, SpaceNews reported Tuesday.

Raymond said the primary motivation behind the new space architecture design is to make national security satellite constellations less vulnerable to adversaries’ anti-satellite weapons. He stressed that the Space Force will turn to a more resilient architecture.

The Space Force’s top officer called for a pivot from architecture that has a few “exquisite capabilities” but is difficult to defend to a more robust and resilient one. The goal will entail deploying large constellations of satellites and spacecraft with more advanced propulsion systems, he said.

Raymond revealed that the first three architecture design studies are for missile warning, space data transport and overhead surveillance. Under his leadership, a Space Warfighting Analysis Center has been established to manage the architecture designs using digital models and simulations.

Raymond said that the SWAC already has completed its first study on the future mix of missile warning and missile tracking satellites. The initial study involved a wide-ranging analysis involving several Department of Defense agencies and the National Reconnaissance Office, he added.

Raymond further revealed that the SWAC has been tasked to design a space data transport layer. The Space Development Agency, which is being absorbed by the USSF in October is developing a data transport layer in low Earth orbit that will be part of the larger architecture of the Pentagon and possibly commercial satellites, he added.