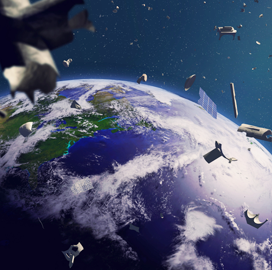 The Space Force is mulling the establishment of a collaboration with the private sector to help clean up the growing volume of debris in orbit, the vice chief of space operations revealed. Gen. David Thompson said that while addressing space debris is not within the mandate of America’s newest military service, it is committed to mitigating the hazards created by such debris, SpaceNews reported Thursday.

Thompson on Thursday told attendees of an AFCEA information technology event that the USSF’s present priority is to “stop making the problem worse,” referring to the wanton depositing of materials in orbit. He clarified, however, that the Space Force does not want to take on the permanent role of cleaning up orbital debris.

The USSF’s second-highest-ranking officer proposed instead to form partnerships with innovative new companies, or even innovative old companies, to develop ideas and technologies to alleviate the problem of space debris, which is seen to pose collision hazards to future space missions. The anticipated risk caused by the continued accumulation of space debris is also known as the Kessler Syndrome.

Experts warn that the day will come when the amount of junk in orbit around Earth will cause big problems for satellites, astronauts and mission planners. Satellite collisions would produce orbiting fragments, each of which would increase the probability of further collisions, leading to the growth of a belt of debris around the Earth, former NASA scientist Donald Kessler wrote in a 1978 paper.

Meanwhile, Thompson said the Space Force would like to do its part to cultivate an industry dedicated to cleaning up space junk. He said that Orbital Prime, a new effort by the USSF’s technology arm, SpaceWERX, is ready to award $250,000 contracts for technologies on space debris removal.