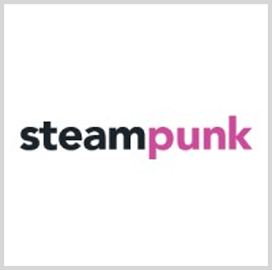 Steampunk, an information technology company, has secured a spot on a potential $2 billion U.S. Patent and Trademark Office contract for a broad range of modernization services.

The BOSS contract is aimed at giving USPTO tools for delivering consistent and high-quality business products to customers.

Steampunk added that the contract will allow the agency to pursue IT modernization with business value at the core of its decisions.

The company will use its Design Intelligence framework to create business value and reduce operational risks for USPTO, Warren added.

According to Steampunk’s website, Design Intelligence is a project delivery approach that combines Agile process management, DevSecOps and human-centered design.

Steampunk said it is one of the three small businesses selected for the BOSS contract. In 2020, USPTO released a list of 24 vendors eligible to compete for a spot on the BOSS program, GovCon Wire reported.

Steampunk said it has been supporting USPTO since 2020, when it was awarded a blanket purchase agreement for the implementation of advanced technologies that can impact business processes.