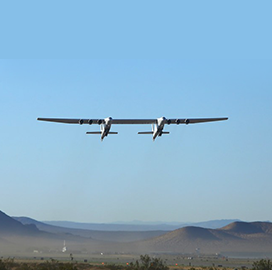 Seattle-based Stratolaunch announced that it has been awarded a research contract by the Air Force Research Laboratory. The contract, which will be carried out in partnership with Booz Allen Hamilton, calls for the examination and assessment of the feasibility of hypersonic flight tests of a wide range of Air Force experiments and payloads on a regular basis, Stratolaunch said Tuesday.

Daniel Millman, chief technology officer for Stratolaunch, said that the company’s goal is to provide affordable and routine access to the hypersonic flight environment. He added that the company will eventually share lessons learned from the collaboration with AFRL, giving rise to “powerful and practical research results benefiting the nation.”

In a statement, Stratolaunch said it supports national security objectives for hypersonic offensive and defensive weapons development through the design, manufacture, and operation of a fleet of reusable hypersonic aerospace vehicles air-launched from its globally deployable carrier aircraft, called, the Roc. Furthermore, the company announced plans to augment existing Department of Defense flight test resources through affordable, commercially contracted, rapid-turnaround hypersonic flight testing for the department and its prime contractor partners.

In December, Stratolaunch was awarded a research contract by the Missile Defense Agency to supplement flight testing resources. Under the agreement, the company will work on delivering targets that are representative and replicative of the actual threat.