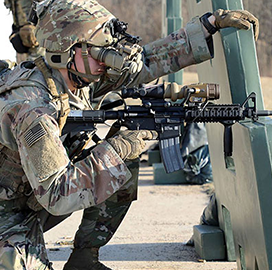 The firm-fixed-price, indefinite-delivery/indefinite-quantity contract will require Teledyne FLIR to provide hardware at the Army’s facilities in Billerica, Massachusetts, and Goleta, California. Weapons systems manufacturer Maztech Industries will serve as a subcontractor for the effort.

The FWS-I system can be mounted on individual weapons and provide infrared imagery capabilities. It can operate in all weather and lighting conditions and can see through fog, smoke and other obscurants, Teledyne FLIR said Thursday.

Robert Mehrabian, chairman and CEO of Teledyne Technologies, said the company will deliver weapon sights to be able to support warfighters whenever they need it the most. He added that Teledyne FLIR will use over four decades of experience to meet the Army’s needs.

The FWS-I program falls under the Army Program Executive Office-Soldier. The contract award was made through the Army Contracting Command.

Teledyne FLIR Defense is a part of Teledyne Technologies that offers solutions and products that support automotive, defense, industrial, marine and public safety use cases. Offerings for government and defense use cases include airborne systems, unmanned systems, soldier solutions and command and control products.

Teledyne FLIR is headquartered in Wilsonville, Oregon, and has multiple sites within and outside the U.S.