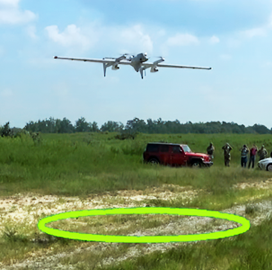 The U.S. Navy is testing an unmanned aerial vehicle and associated systems that could support battlefield medical logistics.

During the tests, research and development company Near Earth Autonomy integrated its autonomous flight systems onto an L3Harris Technologies-built FVR-90 UAV.

The two companies said the test demonstrated how the FVR-90 could deliver supplies to and from contested areas and travel across hundreds of miles. The drone went through multiple scenarios to test how it would perform deliveries.

Near Earth Autonomy’s systems were able to find open areas for the drone to land. Supplies were successfully dropped when the FVR-90 could not find a suitable placeto land, National Defense Magazine reported.

Peter Blocker, director of tactical UAS at L3Harris, said the FVR-90 can carry cargo such as blood and medical supplies. He shared that the drone can carry up to 20 pounds of payload. The aircraft can also perform vertical take-offs and landings, fly for up to 16 hours and travel for around 50 miles, or even farther when it is equipped with a larger antenna.

Nathan Fisher, chief of the medical robotic and autonomous systems division at the Army’s Telemedicine and Advanced Technology Research Center, said military personnel expressed interest in UAV-based supply delivery. He added that the platform could reduce blood wastage and could allow medics to send blood to a blood bank or to another medic who needs blood for transfusion.

Fisher noted that while the service is seeking additional input from medics, the drone is meant to be used for non-medical logistics as well.