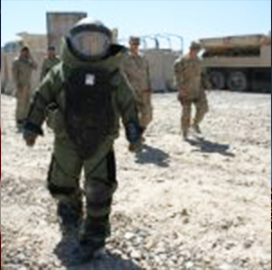 The Department of Defense is looking into new explosive ordnance disposal techniques that would address threats from adversaries like China and Russia.

U.S. Air Force Brig. Gen. William Kale, a member of the DOD’s explosive ordnance disposal program board, said during the Future Force Capabilities Conference and Exhibition that the U.S. military has the capabilities to deal with threats but many areas will need to be addressed in dealing with future threats. To meet future demands, Kale stated that the Pentagon must find and exploit new technologies to become more effective against near-peer adversaries, National Defense Magazine reported.

An effort is underway to find a next-generation breacher that would replace the mine-clearing line charge system. The new concept requires robotic combat vehicles with sensors and payloads to clear minefields from a distance. U.S. Army Col. Russ Hoff, project manager for close combat systems at the joint program office for armaments and ammunition, is seeking information from the industry about what the concept would look like and how it would be integrated into the entire kill chain.

Another EOD method that the military is looking at is focused on rapid airfield damage recovery. For this effort, EOD technicians and engineers would have to perform damage assessment, explosive hazards mitigation and damage repair at a rapid pace. The Air Force has invested over $4 billion for the effort and has deployed a Radbo prototype system at Tyndall Air Force Base. The technology is expected to work in tandem with EOD solutions since disposing of bombs and mines could damage surfaces like airfields.