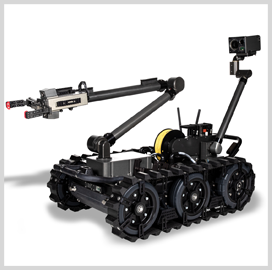 Under contracts worth more than $70 million, the Navy, Army, Air Force and Marine Corps will receive a total of nearly 600 FLIR Centaur robots.

The orders include a $31.6 million contract from the Army for its Man Transportable Robot System Increment II program. With the new award, the ceiling value of the previously awarded MTRS Inc. II contract is brought to around $158 million to $190 million, FLIR announced Monday.

Using the system, operators are able to attach various sensors and payloads to tackle issues such as chemical, biological, radiological and nuclear threats, the Arlington, Virginia-headquartered company explained.

Centaur is a medium-sized UGV designed to offer military members a standoff capability to “detect, confirm, identify and dispose of hazards.”

Features of the system, which is compliant with the UGV Interoperability Profile, include an advanced electro-optical/infrared camera suite and a manipulator arm that could extend to more than 6 ft. The UGV also has the ability to climb stairs, according to FLIR.

The Army chose Centaur as its MTRS Inc. II solution in 2017 to support a multi-year program of record. Since the 2017 contract award, other military services have deployed the UGV to their EOD units as a ground robot system.

FLIR has provided more than 1,300 Centaurs to the military branches under orders amounting to more than $170 million since early 2020.