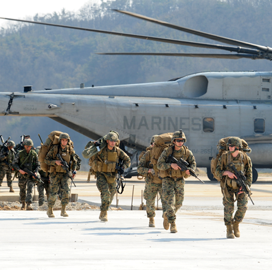 The U.S. Marine Corps launched the Advanced Naval Technology Exercise in an effort to fast track the deployment of promising new technologies. The effort was designed to enable quick feedback and the gleaning of useful insights from a range of potentially valuable prototypes.

As part of the Corps’ Force Design 2030, which puts emphasis on the speedy development and fielding of new technologies that will give Marines a tactical edge, the USMC has opened a first-of-its-kind war-gaming center. The center will allow researchers to repeatedly run scenarios, each time tweaking concepts, tactics and technologies, an officer close to the project said.

The USMC broke ground on the center in May. Construction is expected to be completed by 2023, with the center opening in 2024 and reaching full capability in 2025, according to a news release.

The lab will help identify where new technology may fit into the Corps’ needs, turning into requirements, which will ideally lead to acquisitions, Defense News reported Wednesday.

Scott Lacy, chief of staff of the Marine Corps Warfighting Lab, said the new facility will enable the USMC to speed up the “campaign of learning,” which is about identifying a concept; war gaming that concept; ultimately taking that result and conducting a live, virtual or constructive experimentation. Christened the Marine Corps Wargaming and Analysis Center, the lab is touted to give the service rapid learning capability.

The lab will play a major role in identifying new technologies on the horizon that may fit the Corps’ needs, turning them into requirements, and ideally leading to acquisitions, Lacy said. The project is all about hastening the campaign of learning, to quickly provide the information needed to inform decision-making, he added.