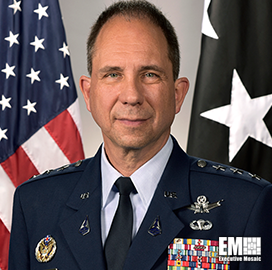 Lt. Gen. John Shaw, deputy commander of the U.S. Space Command, believes it is only a matter of time before cybercriminals target the commercial space sector given the interconnectedness of the cyber and space realms.

Speaking at a previous Washington Space Business Roundtable forum, Tournear went as far as saying that cyberattacks are much more dangerous than missile strikes because they are capable of shutting down an entire constellation.

In recognition of the growing threat of cyberattacks on the space domain, Shaw emphasized the importance of building cyber resilient space capabilities.

“We can’t do future space capabilities without acknowledging the cutting edge of cyber, both the threats but also the defenses and the capabilities there that need to be woven in,” Shaw said.

A Trump-era directive that addresses space cybersecurity concerns is being considered for implementation by the Biden administration.

Space Policy Directive 5, which was issued last September, lists cybersecurity principles for space systems. The principles include integrating risk-based, cybersecurity-informed engineering into space systems and making sure that they have capabilities to protect against unauthorized access and communications jamming and spoofing.