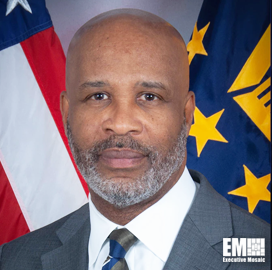 The Defense Logistics Agency has appointed W. Eric Smith as its new chief of staff.

Vice Adm. Michelle Skubic, director of the DLA, announced Smith’s appointment in an email sent to senior leaders on April 27.

Smith had served as deputy commander of DLA Energy since November 2019. DLA Energy is a major subordinate command of the agency that is based out of Fort Belvoir in Virginia.

Smith, who is a former logistics management officer within the Army, also spent seven years at the Department of Homeland Security, where he implemented a national and interagency all-hazards operations support concept.

In 2006, he worked as executive officer to former DLA Director Lt. Gen. Robert Dail and staff director for the agency’s Logistics Operations Center. In 2007, he was appointed member of the senior executive service when he joined the Federal Emergency Management Agency.

At FEMA, Smith was assistant administrator for logistics management, overseeing the transformation of domestic disaster logistics.

He will assume his new role at the DLA from Kristin French, who now serves as deputy director of the agency’s logistics operations.

Smith is a graduate of the University of Tennessee with a bachelor’s degree in political science. He also holds a master’s degree in national security from the National War College and a Master of Business Administration degree from Saint Ambrose University.