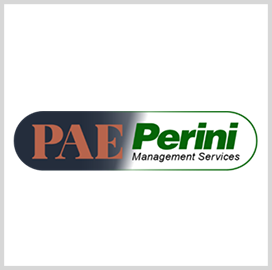 PAE-Perini has landed a spot on the seven-year, $6.4B indefinite-delivery/indefinite-quantity U.S. Air Force Augmentation Program V contract vehicle. Under the contract, PAE-Perini will support the government's rapid response and urgent mission efforts worldwide.

John Heller, PAE's president and CEO, cited the merits of PAE and Perini's previous successes. “The Air Force recognized they could rely on our engineering support and logistics for the delivery of mission-critical supplies," he said.

Previously, the company served the government under the predecessor contract vehicle AFCAP IV. PAE-Perini won task orders such as the $96.5M deal to provide base operations services at Kirtland Air Force Base.

AFCAP IV, which is set to expire on Sept. 30, was used to support recovery efforts at Tyndall Air Force Base after Hurricane Michael; the flood at Offutt AFB, Nebraska; the earthquake at Joint Base Elmendorf-Richardson, Alaska; and the fight against an Ebola resurgence in Western Africa.

PAE is an international trade and development company based in Falls Church, Virginia. It specializes in global missions, training, logistics, operations and maintenance services, stabilization, peacekeeping, national security, reconstruction missions, expeditionary construction and justice training, according to its LinkedIn profile.