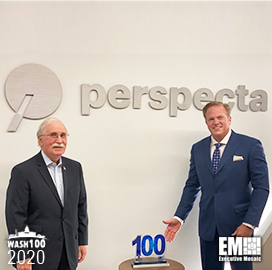 Barry Barlow, senior vice president and chief of staff at Perspecta, has received his first Wash100 award from Executive Mosaic.

Executive Mosaic CEO Jim Garrettson presented the award in recognition of Barlow's role in the strategic growth of Perspecta and his contributions to valuable contract wins. Barlow is responsible for Perspecta's long-term technology strategy and vision.

His team is in charge of growing the technical capabilities of their peers at Perspecta, ensuring technical relevance in the marketplace.

“When you combine decades of experience on Navy programs and systems with a deep rooted heritage of advanced engineering capabilities and add an unmatched portfolio of innovative cyber solutions, you get Perspecta,” Perspecta said.

In September 2019, the Navy awarded Perspecta a potential $656.9M contract modification to keep providing IT support services. The deal was awarded under the service's Next Generation Enterprise Network program.

The modification extends the NGEN contract's sixth option-year ordering period by up to seven more months. Work will take place across the United States, Japan, Guam, South Korea and Europe.

Executive Mosaic annually presents the Wash100 award to executives and leaders in the government contracting space who demonstrate skills in leadership, innovation, reliability, achievement and vision.