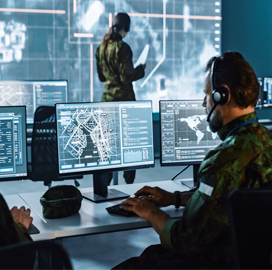 The Department of Defense is always looking for ways to ensure that its technology systems for various organizations are optimal. It is also growing its partnerships with the private industry to achieve significant gains in various areas, including IT improvements, facilities management and engineering.

Various companies have business units that are dedicated to supporting the Pentagon and ensuring that the agency’s technology solutions are modernized. These units are led by government contracting experts who are experienced in handling defense-related matters.

Bernie Boucher serves as the vice president of business development for CACI International‘s Department of Defense team, working out of Reston, Virginia. He leads a team of business development executives, leveraging the company’s core qualifications in information technology infrastructure modernization, operations and sustainment, application development and business process services, according to his LinkedIn profile.

Boucher joined CACI in November 2020. His current role sees him focused on “new and organic growth by ensuring excellence in the delivery of full life cycle business development activities across operating segments.” His other responsibilities at the firm include strategic planning, target identification and prioritization, capture strategy development and implementation, and proposal management, his profile reveals.

Before joining his current employer, Boucher was vice president of business development for IT, network communications and intelligence at Vectrus. In that role, he was responsible for managing all aspects of account growth, new business development and customer relationship management across the firm.

Previously, Boucher was vice president of defense growth at CSRA, an IT services firm that was acquired by General Dynamics. In that role, he managed all aspects of account growth, new business development and customer relationship management across the firm within assigned accounts.

Thomas Watson is the senior vice president of Serco’s defense services group. He has over three decades of experience in leading teams that support defense and federal civilian agencies.

Watson leads a group that supports Serco’s customers from the Department of Defense and the Intelligence Community. The defense services group’s services include shipboard and base modernization, facilities management, hardware integration, logistics and information technology support.

Watson was the SVP of federal services at Serco before taking on his current leadership position, according to his LinkedIn profile.

Prior to moving to Serco, the industry veteran worked at Science Applications International Corp. for over two decades. He was the SVP and general manager of SAIC’s Navy and Marine Corps business unit, which provided technical and engineering support services and products to the Navy and USMC.

The other leadership roles that Watson held as SAIC include VP and operations manager of Navy programs and VP and acting general manager of the company’s Defense & Maritime Solutions business unit.

He started working in the private industry in 1993 as an engineering technician for Serco.

The executive was an electronics technician for the U.S. Navy from 1987 to 1993.

Watson holds a master’s degree in business administration and management from the University of Maryland and a bachelor’s degree in information technology from the National University.

Serco delivers public service support offerings to clients, including those in the defense, transport, justice, immigration and health sectors. Its U.S. headquarters is located in Herndon, Virginia, and it has multiple offices across the world.

John Erwin II is the director of defense and supply chain risk management at Dun & Bradstreet, working out of Washington, D.C. He is a distinguished military veteran and executive leader with over 20 years of experience in defense, intelligence and national security, according to his LinkedIn profile.

Erwin joined Dun & Bradstreet in October 2016. In his current role, he is responsible for driving innovation and growth in sales operations, account management and customer success for an over $50 million dollar defense and national security sales portfolio.

Erwin was a 2020 D&B Empirical Excellence awardee, a recognition of his exceptional sales performance. He also holds a Top Secret security clearance.

Before joining his current employer, Erwin was vice president of government relations and strategic planning at Vencore, where he worked for almost five years. In that role, he was focused on supporting the National Reconnaissance Office.

Erwin served in the Army for over 23 years. During his military service, he took on various intelligence and counterintelligence roles.

Greg Bateman is the regional vice president of defense at software company Salesforce and is a Potomac Officers Club member. He is an expert in technology support services and has supported various defense and federal agencies.

Bateman oversees Salesforce’s business for the Department of Defense’s Fourth Estate. The Fourth Estate is the collective term for Pentagon agencies that are not part of the military, intelligence community or combatant commands. Examples of Fourth Estate agencies include the Defense Information Systems Agency, the Defense Health Agency and the Defense Advanced Research Projects Agency.

Bateman has been with Salesforce since March, according to his LinkedIn profile.

He was the director of go-to-market at Pegasystems’ justice and public safety business unit before assuming his current role. He oversaw strategy and execution of go-to-market strategies with system integrators and independent software vendors.

The industry veteran also handled multiple leadership roles at the computer company Microsoft, where he worked for nearly 23 years. Positions that Bateman held at Microsoft include managing director for the federal sector, director of joint defense agencies and strategic account executive for U.S. Navy and U.S. Marine Corps programs.

He started working in the industry sector in 1995 as a direct sales representative at the software company Oracle.

Bateman holds a master’s degree in finance from the University of Maryland and a bachelor’s degree in international relations from Rhodes College. He also holds a license for Microsoft Azure Fundamentals and is a certified Amazon Web Services cloud practitioner.

Salesforce is a cloud-based software company that offers customer resource management platforms to customers in different sectors. It is headquartered in San Francisco and has multiple offices within and outside the U.S.


Cornelius Brown, Managing Director for the Department of Defense Business at Verizon

Cornelius Brown is the managing director of Verizon’s Department of Defense business, working out of the Atlanta Metropolitan Area. He is a “detail-oriented and charismatic sales leader” with a successful track record for driving growth in highly competitive landscapes, according to his LinkedIn profile.

Brown was appointed to his present position in May 2020. In his current role, he is responsible for leading Verizon’s DOD organization, with an emphasis on helping expand its technology portfolio. He is focused on accelerating IT modernization and enabling digital transformation to support the customer’s mission.

Before taking on his current responsibilities, Brown was director of strategic sales at Verizon Connect, the Verizon subsidiary offering fleet management software. That role saw him helping customers optimize the way their employees, vehicles and things move around.

Brown’s entire professional career, spanning almost two decades, has been spent working at Verizon. He joined the company as a senior sales consultant in 2002.

Brown earned his degree in communications from The University of Kansas. He later earned his Master of Business Administration degree from Baker University.