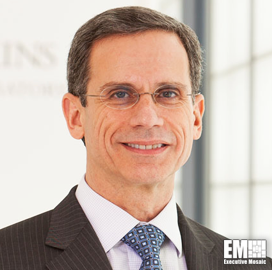 Ralph Semmel has served as the eighth director of the Johns Hopkins University Applied Physics Laboratory since July 2010.

The university research center conducts research and development in support of the Department of Defense, the Intelligence Community, NASA and other federal agencies.

As director, Semmel leads a staff of over 7.2K who contribute to a wide range of nationally and globally important technical and scientific fields.

Under his leadership, APL sent robotic spacecraft to the sun and to Pluto, reinforced America's cybersecurity, strengthened the nation's armed forces and extended the influence of research and development for health applications and advanced prosthetics.

His other credits at APL include business area executive for science and technology, deputy director of the Research and Technology Development Center and supervisor of the System and Information Sciences Group.

From 1997 to 2010, Semmel served as chair of the graduate programs in computer science, information assurance and information systems engineering from Johns Hopkins University's Engineering for Professionals.

Scotland's The Daily Record recognized Semmel as an "Influential Marylander" in an issue released March 29, 2019.