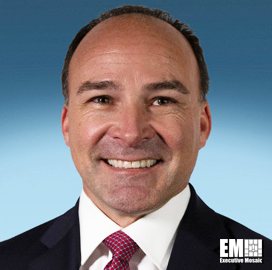 Robert Frey, a Potomac Officers Club member, is the principal for government customer requirements at the e-commerce company Amazon.

Frey has been with Amazon since August 2021, according to his LinkedIn profile.

Frey worked with various defense contractors before joining Amazon. He was the director of requirements and a strategic account executive at Raytheon Intelligence & Space from May 2019 to August 2021.

The Amazon principal also worked at different military and government agencies before joining the private industry. He was a commander at the Defense Contract Management Agency in Korea from 2007 to 2008, a director and deputy director within the National Reconnaissance Office from 2004 to 2007 and an executive at the Space and Missile Center from 1996 to 1999. He was an acquisition and contracting officer within the U.S. Air Force from 1988 to 2008.