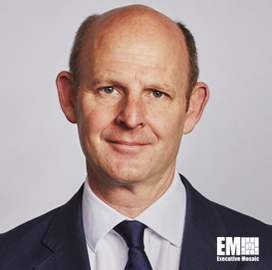 Pearce joined Inmarsat in January 2005 as general counsel. He was promoted to senior vice president of enterprise in January 2009 then took on his current role in January 2012, according to his LinkedIn profile.

Under his leadership, Inmarsat, in 2020, set out to provide L-TAC and Global Xpress services to government customers. The service was made possible through Inmarsat's and L3Harris Technologies' satellite communication and military radio system technologies.

Prior to that role, Pearce was a partner at international law firm Linklaters, which specializes in corporate finance, mergers and acquisitions, and private equity transactions.

Pearce earned a master's degree in modern history and a bachelor's degree in history from Oxford University. He won the 1995 Fullbright Fellowship in U.S. securities law at the Georgetown Law Center.

He is a visiting fellow of the Imperial College Business School, London, where he lectures on entrepreneurship.

Pearce is also a member of the board of directors of the EMEA Satellite Operators Association, commissioner of the Broadband Commission for Digital Development and member of the Steering Committee of the Smart Africa initiative.

Posted on February 4, 2021 by Robert Johnson