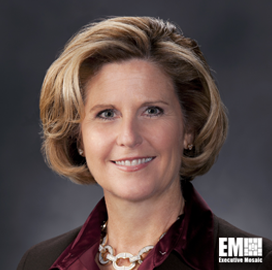 Sharon Watts has been serving as the chief administrative officer of Constellis since January 2019. Constellis is a Virginia-based company providing security and risk management services, including base operations support, mine action and investigations administrative support.

Her stint with Leidos lasted for two and a half years. During that time, she served as deputy president of the engineering company’s defense and intelligence group. She also took on the role of senior vice president and chief admin officer.

Watts’ career at Lockheed was significantly longer, lasting for more than 26 years.

Starting at the role of program and engineering manager in 1990, she eventually climbed the ranks and was promoted to her first VP role in 2008.

She also served as VP of the GeoVision business line within Lockheed Martin Information Systems & Global Solutions. The role gave her responsibility for a team supporting complex mission requirements for the intelligence community.

Her final position at Lockheed was VP of the engineering and technical capabilities organization, which develops capabilities focused on mission systems, mission operations and sustainment, enterprise information systems, cyber security and data analytics.

Watts graduated from Marymount University in Virginia with a bachelor’s and master’s degree in business administration.