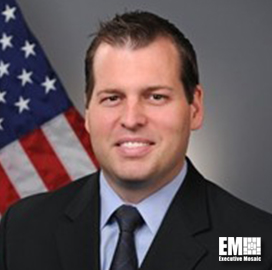 Mr. Goodrich is currently serving as a Deputy Director for NavalX, an innovation cell for the US Navy. NavalX seeks to create a more agile, connected, and collaborative US Navy that can guide stakeholders to rapidly deliver capability to the warfighter. The organization reports to the Assistant Secretary for Research Development and Acquisition (ASN RDA) and the Office of Naval Research (ONR) and seeks to bring together industry best practices to advance the US Navy in capability and culture change.

Previously, from 2018 to 2020, Mr. Goodrich served as the Innovation Technical Director for the NAVSEA PEO Unmanned and Small Combatant’s Science and Technology (S&T) directorate, which serves to bridge the gap between the S&T and acquisition community and fosters a large portfolio of next generation technologies for unmanned systems, mine warfare, and affordable combatant ships.

From 2014-2018, Mr. Goodrich served as the Science Director for the Office of Naval Research Global (ONRG) at the US Embassy in Santiago, Chile. While in South America, he worked with top researchers in Latin America to fund emerging scientific research and developed cooperation between the international S&T community and US academia, US industry, and US government labs. The critical program advances science globally and creates partnerships between the US and top researchers. Previously, Mr. Goodrich supported the Chief of Naval Research (CNR) and the broader ONR leadership as the International Programs Officer in Arlington, VA. The position assisted in the development and coordination, of all bilateral relationships between ONR and international partners. Preceding this detail assignment Mr. Goodrich was the Senior Engineering Manager of a $20M R&D program in NAVSEA 05T, NAVSEA’s CTO which helped transition near-term technology to the fleet.

Since 2002, Mr. Goodrich has worked at the Naval Surface Warfare Center Carderock Division (NSWCCD), serving initially as an analyst in Carderock’s structures and survivability group working on LPD-17 and DDG-1000 (Zumwalt Class Destroyer). Since 2009, he has had five unique assignments away from Carderock and has since served in a variety of capacities at NAVSEA, ONR, ONRG, PEO USC and now NavalX helping to bridge the gap between science, technology, acquisition, foreign diplomacy, and transitioned systems that help create a significant technological advantage for our Sailors and Marines.