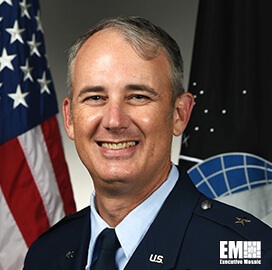 Brig. Gen. Cothern was commissioned in 1993 as an ROTC graduate of the University of Central Florida. His career has spanned a range of assignments primarily acquiring or planning for a variety of space systems, running the gamut from communications, signals intelligence, missile warning, and force application. His space systems experience includes all major segments: ground, space vehicles, payloads, and launch vehicles. He commanded the Space Based Infrared Systems Ground Squadron, Space and Missile Systems Center at Los Angeles Air Force Base, California, where he led his unit during development, test and fielding of the ground control system for the first SBIRS geosynchronous satellite. Brig. Gen. Cothern’s joint assignment was in the U.S. Strategic Command’s Center for Combating Weapons of Mass Destruction as Chief of the Requirements Integration Department.