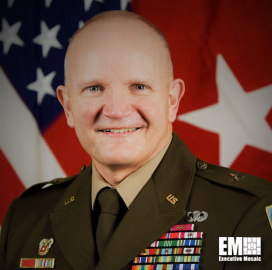 BG Rob Parker is a graduate of North Georgia College and received his commission through the ROTC into the U.S. Army Signal Corps in 1993. He holds a Bachelor of Science in Biology, a Masters of Science in Telecommunications Management from Webster University, and a Masters of Strategic Studies from the U.S. Army War College. Assigned as the Deputy Director, J6 in January 2021, he serves as the Chair, Joint All-Domain Command & Control - Cross Functional Team and separately, as the Chair, C4/Cyber Functional Capabilities Board. In both roles, he reports to the Joint Requirements Oversight Council (JROC).Prior to his current assignment on the Joint Staff, he served as the Director, Joint & Integration within the Headquarters, Dept. of the Army G8 and previously, as the Chief, Mission Command Division (2018-2020), also in the G8. Before arriving in the Pentagon, he served as the Chief Information Officer (CIO) and Deputy Chief of Staff, G6 for the United States Army - Europe. Notably, he served as the last Commander of the 5th Signal Command (Theater) in support of all Army forces in Europe and Africa from 2016-2017. Following graduation from the United States Army War College in 2014, COL Parker was selected for CSL duties as the G-6, III Armored Corps at Fort Hood, Texas and then deployed with the Corps to CJTF-Operation Inherent Resolve (OIR) where he served as the CJ6 from 2015-2016.BG Parker is a graduate of the Army Force Integration Course, the Joint C4 Systems Planner’s Course; the Army Basic Parachutist Course; the U.S. Navy’s Survival, Evasion, Resistance and Escape course (SERE); the Army’s Northern Warfare Course in Alaska and the US Army War College. BG Parker's awards include the Legion of Merit with three bronze oak leaf clusters; the Bronze Star; the Defense Meritorious Service Medal with bronze oak leaf; the Army Meritorious Service Medal with silver oak leaf; the Army Commendation Medal; and the Army Achievement Medal. He is a recipient of the Army Signal Regiment’s Bronze Order of Mercury, the Armor Regiment's Order of St. Martin and earned the German Schutzenschnur medal. BG Parker is happily married to his wife of 27 years and they have two children.