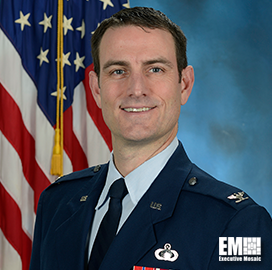 Col Collins was commissioned in 1997 as a graduate from the United States Air Force Academy. He entered into the acquisition career field at Eglin AFB where he worked on several air-to-ground weapons programs. Col Collins then took a career broadening tour as an instructor for the Air Force’s basic developmental education program for newly commissioned officers. Following the instructor tour, his acquisitions career resumed at Patrick AFB and then Hanscom AFB where he developed and delivered mission critical information technology programs. During this time he deployed in support of Operation Iraqi Freedom and performed quality assurance duties in support of the $7B LOGCAP contract. After receiving a Master’s in Military Arts and Sciences from Air Command and Staff College, he was assigned to the Pentagon to serve as a program element monitor for critical combat identification and air traffic control systems, as well as the Chief of Acquisition Policy in the Secretary of the Air Force and Chief of Staff of the Air Force’s Executive Action Group. Col Collins also served as a the Commander of the 738th Air Expeditionary Advisory Squadron in Kabul Afghanistan where he advised the Afghan Air Force’s efforts to develop an air university tasked with educating and training the next generation of Afghan Air Force officers. He also earned a second Master’s Degree, in Strategic Studies from Air War College, Maxwell AFB, AL. Over his 24 years of service, Col Collins has managed programs associated with weapons, national security, cyber, and information technology at the branch, squadron, and division levels. He holds a Level III certification in Program Management, Level I certification in Test and Evaluation, Level I certification in Acquisition Logistics and is a certified master instructor within Air Education and Training Command.

Prior to his current assignment, Col Collins was the Deputy, Enterprise IT and Cyber Infrastructure Division, C3I&N Directorate, Air Force Life Cycle Management Center, AFMC, Hanscom AFB, Masssachussetts. He is married to the former Heidi Waddell of Orlando, Florida and has two children; Jackson (20), and Jesse (18).