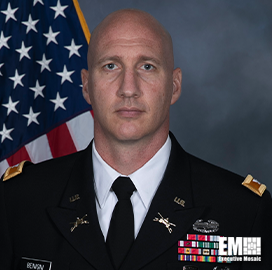 He was commissioned as an armor officer in the United States Army and serves as an Operations Research Systems Analyst. His assignments include commanding a company of tanks and infantry in Eastern Baghdad from 2004-2005, serving as an assistant professor in the Department of Mathematical Sciences at the United States Military Academy, and providing strategic planning support at the United States Special Operations Command, MacDill Air Force Base, FL, USA.

He has a B.S. in operations research from the United States Military Academy at West Point, NY, a M.S. in applied statistics from the Colorado School of Mines, and his doctorate Societal Computing from Carnegie Mellon University’s School of Computer Science. His academic research in the area of online extremism and propaganda is highly cited, and he continues to focus on applied machine learning and data mining in support of current operations.