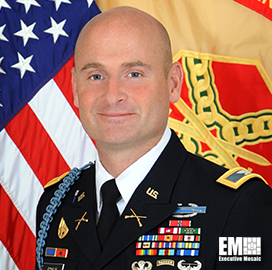 Colonel Matthew Scalia currently serves as the Deputy Director, Installation Management Command Directorate – Training. He was commissioned as an Infantry Officer from the United States Military Academy at West Point in 1995, focusing his studies on History and Systems Engineering. His career assignments include various types of Infantry units, multiple overseas locations and deployments, and bridge between the operational and institutional forces.
COL Scalia’s most recent assignment was as the Garrison Commander of Fort Benning, GA, overseeing the daily operations and future development of the installation with over 50,000 military service members, dependents, and federal employees. Prior to that he served as the G3 Chief of Operations for the Maneuver Center of Excellence, Fort Benning. He also served as the Chief of Enlisted Infantry Branch, US Army Human Resources Command, Fort Knox, KY, managing the assignments and professional development of the Army’s 60,000 Infantry soldiers. COL Scalia commanded 1st Battalion, 46th Infantry Regiment (Basic Combat Training), Fort Benning, which produced over 6,000 new Soldiers for the Army.
COL Scalia’s operational experience includes service in the 2nd Brigade, 101st Airborne Division (Air Assault), Fort Campbell, KY; 1st Brigade, 1st Armored Division, Friedberg, Germany; and 4th Brigade Combat Team, 82nd Airborne Division, Fort Bragg, NC. He deployed to Iraq as an Infantry Company Commander in support of Operation Iraqi Freedom (May 2003 – July 2004) and to Afghanistan as a Cavalry Squadron Operations Officer and Brigade Executive Officer in support of Operation Enduring Freedom (August 2009 – August 2010).
COL Scalia has served multiple times in the Army’s Training and Doctrine Command (TRADOC). He was a Platoon Trainer for the Infantry Officer Basic Course, Fort Benning; an Assistant Professor of Military Science at the University of Delaware Reserve Officer Training Corps (ROTC); and the TRADOC Liaison Officer to the British Land Warfare Centre, Warminster, United Kingdom. In this last role he provided a link between the US and British Armies in sharing lessons learned, doctrine, and capability development.
COL Scalia possesses a Bachelor of Science degree from USMA and a Master of Strategic Studies degree from the US Army War College. His awards and decorations are commensurate with a career infantry officer.
COL Scalia is from McLean, Virginia, and is married to Michelle Dear Scalia of Venice, Florida. They have three daughters and one son.