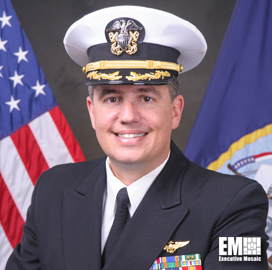 Capt. David Wilson attended the University of Virginia on an NROTC scholarship and graduated in May 1999 with a Bachelor of Science in electrical engineering. Upon completion of flight training, he was designated a Naval Aviator in February 2001.

Wilson reported to HSM-41 at NAS North Island, San Diego, California, in February 2005, as an SH-60B and MH-60R Instructor Pilot. While at HSM-41, he served as the Schedules Officer, Aircraft Division Officer and Operations Department Head. In 2006, Wilson was selected as the HSM-41 Instructor Pilot of the Year. While at HSM-41, Wilson completed an Executive Master of Business Administration from the Naval Postgraduate School Distance Learning Program. Before departing, Wilson was selected as the HSM-41 Officer of the Year for 2007.

Wilson reported to USS Boxer (LHD-4) as Hangar Officer at NS San Diego, California, in November 2007. During this tour, he completed two deployments. The first, in 2008, was to the Eastern Pacific for Humanitarian and Civic Assistance to El Salvador, Guatemala and Peru. The second, in 2009, was to the FIFTH FLEET AOR with the Boxer Expeditionary Strike Group for counter-piracy operations as Mini Boss. While onboard Boxer, Wilson earned his qualifications as Command Duty Officer and Officer of the Deck Underway.

In May 2010, following refresher training in HSL-40, Wilson reported to HSL-49 in NAS North Island for his Department Head tour. As Officer in Charge, Detachment SIX, Wilson completed an Eastern Pacific deployment embarked in USS Rentz (FFG-46). During the deployment, Detachment SIX supported Operation Martillo, seizing over 1,700 pounds of contraband. Upon return from deployment, Wilson served as Squadron Operations Officer.

Wilson then completed a second master’s degree in National Security and Strategic Studies at the U.S. Naval War College in Newport, Rhode Island.

Following graduation, Wilson reported to the Joint Staff as part of Operations Team One at the National Military Command Center in July 2013. While part of the Operations Team, he served as a Presidential Strike Advisor, and later served as Chief of Training for the Operations and Training Support Division of the J-33 Directorate.

In August 2015, Wilson reported to HSM-41 to refresh in the MH-60R. In April 2016, Wilson reported to the World Famous Scorpions as HSM-49’s Executive Officer and assumed command of HSM-49 in July 2017. While serving as Commanding Officer, HSM-49, he earned the Battle “E”, Sikorsky Golden Wrench and Retention Excellence awards.