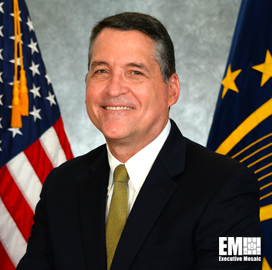 Mr. Pope serves as the Executive Director for Naval Information Warfare Systems Command (NAVWAR). In this role, he shares responsibility for approximately 12,000 civilian and military personnel and an annual budget of more than $9 Billion, focused on the acquisition, delivery and sustainment of major command, control, communications, computers, intelligence, surveillance, reconnaissance, enterprise information, and space systems for the Department of the Navy.
Mr. Pope was appointed to the Senior Executive Service in January 2016 and began his government career in 1983. Prior to his current assignment, Mr. Pope served as Executive Director and acting Program Executive Officer for Command, Control, Communications, Computers, Intelligence, and Space Systems. In this capacity, he was responsible for integrating, executing, and delivering capability in an annual $4 Billion portfolio supporting information needs for naval, joint, and coalition warfighters.
Mr. Pope is a University of Pennsylvania graduate with a Bachelor of Science in Electrical Engineering. Receiving his Navy commission via the University of Pennsylvania NROTC in 1983, Mr. Pope served afloat on USS Gallery (FFG-26) where he qualified as a Surface Warfare Officer. Attending the Naval Postgraduate School, he earned a Master of Science degree with distinction in Electrical Engineering.
His ashore career experience includes significant roles in all aspects of engineering and acquisition. He was assigned to the Naval Sea Systems Command as the Test and Evaluation Officer for the joint U.S. - Australian NULKA Decoy Project. Following this tour, where he qualified as an Engineering Duty Officer, Mr. Pope served as Special Projects Officer for a CNO-directed classified program. Mr. Pope then served as Force Combat Systems Officer at Naval Surface Force, U. S. Pacific Fleet.
Mr. Pope’s tours within NAVWAR include Joint Task Group Manager, Afloat Installations Manager and Advanced Tactical Data Link Systems Engineer in the Tactical Data Link Programs Office (PMW 159). In December 2000, Mr. Pope was selected as the Deputy Program Manager for the Navy Satellite Communications Program Office (PMW 176). After serving as the fifth Commanding Officer of Naval Information Warfare Center Atlantic, Charleston, S.C., he returned to PEO C4I where he served as the Major Program Manager of the Communications
Program Office (PMW 170) and the Principal Deputy Program Executive Officer. As a plank owner of NAVWAR’s Fleet Readiness Directorate, Mr. Pope served as the Fleet Support Program Manager. After 29 years of active duty, Mr. Pope began his civilian career in 2012 as the Director for the Data Center and Application program within NAVWAR. Mr. Pope is a member of the Defense Acquisition Corps and is certified Level III in Acquisition Program Management. His active duty awards and decorations include the Legion of Merit with Gold Star in lieu of fourth award, Meritorious Service Medal with Gold Star in lieu of third award, Navy Commendation Medal with Gold Star in lieu of second award, Navy Unit Commendation, and the Sea Service Deployment Ribbon. Mr. Pope received the Department of the Navy Superior Civilian Service Award in June 2020.