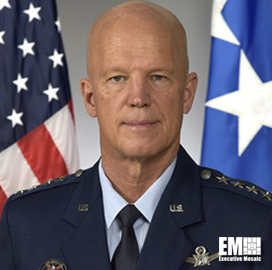 Gen. John W. "Jay" Raymond is the Chief of Space Operations, United States Space Force. As Chief, he serves as the senior uniformed Space Force officer responsible for the organization, training and equipping of all organic and assigned space forces serving in the United States and overseas.

Gen. Raymond was commissioned through the ROTC program at Clemson University in 1984. He has commanded at squadron, group, wing, numbered air force, major command and combatant command levels. Notable staff assignments include serving in the Office of Force Transformation, Office of the Secretary of Defense; the Director of Plans, Programs and Analyses at Air Force Space Command; the Director of Plans and Policy (J5), U.S. Strategic Command; and the Deputy Chief of Staff for Operations, Headquarters U.S. Air Force.