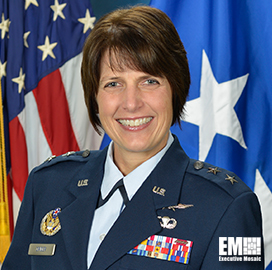 Maj. Gen. Kimberly A. Crider is the Air Force Chief Data Officer, Headquarters, United States Air Force, Washington, D.C. She develops and implements strategies for enterprise data management, analytics, and digital transformation to optimize performance and drive out innovation in and across all missions and operations.

General Crider was commissioned through the ROTC program at Duke University in May 1986. She served on active duty for eight years and has been a Reservist for over 20 years, having held positions in Air Force Space Command, Air Force Materiel Command, Air Education and Training Command, Pacific Air Forces Command, United
States Air Forces Europe, Headquarters Air Force, Air and Space ISR Center and the Defense Information Systems Agency. In her previous assignments at the Air Staff, General Crider was the Mobilization Assistant to the Under Secretary of the Air Force, Mobilization Assistant to the Deputy Chief of Staff for Strategic Plans and Requirements, and the Mobilization Assistant to the Chief, Information Dominance and Chief Information Officer, Office of the Secretary of the Air Force. In these roles she assisted with setting the Air Force's strategic direction, policy guidance and procedures for the effective, secure and efficient use of information technology to enable integrated warfighting capabilities and information dominance across all mission areas. General Crider is a master cyberspace operations officer and a senior acquisition officer.

In her civilian capacity, General Crider is a CEO & partner for a leadership and consulting firm, which focuses on developing leaders in the field of IT. She has led numerous large-scale IT and systems engineering initiatives in academia, industry and government, and has expertise in digital transformation, data strategy, enterprise infrastructure, cloud technology, IT workforce development, cyber security, network defense operations, and command and control.