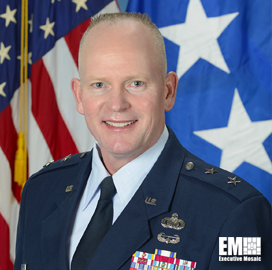 Maj. Gen. Michael J. Schmidt is Program Executive Officer for Command, Control, Communication, Intelligence, and Networks, Hanscom Air Force Base, Massachusetts. In this position, he is responsible for more than 2,600 personnel and acquisition execution of a $15.1 billion portfolio developing, producing, deploying and sustaining Department of the Air Force joint and coalition cyberspace capabilities, aerial and terrestrial networks, cryptologic systems, electronic warfare, data weaponization, kill chain technologies and integration, information technology infrastructure, software platforms and factories, cloud services, combat communications, force protection systems, data link systems, and special projects to enable decisive combat operations.
Maj. Gen. Schmidt entered the Air Force in 1991 after graduating from Iowa State University as an industrial engineer and ROTC distinguished graduate. He served in numerous engineering, program management, and leadership positions. He worked as a Lockheed Martin program manager via the Education with Industry program. He served as Aide-de-Camp to the Commander of Air Force Materiel Command; both an Air Force Legislative and Appropriations Liaison; the F-35 Program Element Monitor; an advisor to the Afghan National Army and commanded the 696th Armament Systems Squadron. Maj. Gen. Schmidt then served as the Deputy for Tactical Aircraft Systems in the Office of the Secretary of Defense, and as the Senior Materiel Leader for the Contractor Logistics Support Division at the Oklahoma City Air Logistics Center. He also served as Program Executive Officer for Fixed Wing Programs at U.S. Special Operations Command, Program Executive Officer for Intelligence, Surveillance, Reconnaissance and Special Operations Forces at Air Force Materiel Command, and Program Executive Officer for Fighters and Bombers. He is a graduate of the Air Force Legislative Fellows Program and the National War College.