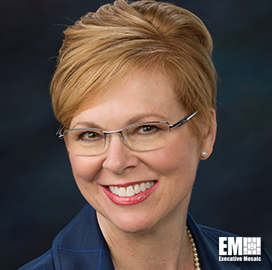 Mrs. Tourangeau, an engineering and USAF ROTC graduate of Georgia Tech, served four years on active duty as an officer in the United States Air Force at Wright Patterson AFB. While there she was a program manager and research engineer working on the nation’s Strategic Defense Initiative’s laser programs. She completed her Masters in Electrical Engineering at the Air Force Institute of Technology also at Wright Patterson AFB, majoring in electro-optics and semiconductor physics. While there, she designed and developed a silicon-based circuit using conventional techniques including photolithography and chemical etching. Her thesis work addressed a Russian spatial light modulator, modeling the mathematical electrical response equations in MatLAB. Following separation from active duty, she joined the USAF Reserves and went to work as a member of Raytheon’s Engineers and Constructors assigned to the Savannah River Site. There she designed specifications for isokinetic sampler systems, moisture transmitters, and instrument racks. She transferred to Raytheon Electronic Systems in Tewksbury, MA, to develop the terminal track algorithm for an infrared seeker head for the BAT munition. She co-authored a patent for this work, US Patent No. 6,072, 889.
In 1996, Mrs. Tourangeau transitioned to wireless data systems engineering for Bell Atlantic NYNEX Mobile/Bell Atlantic Mobile (BAM)/Verizon Wireless, designing and implementing CDPD (Cellular Digital Packet Data) systems, a 14.4 kbps analog cellular wireless data solution for industry and public service. While at BAM, she began attending Northeastern University full time to acquire her MBA in High Technology and Innovation. Following a short period at Global Crossing as a landline systems engineer, she joined Sun Microsystems as a Sales Systems Engineer, devising complex data center solutions for a broad range of customers. While at Sun Microsystems, she completed her MBA and transferred to engineering management. Her first management position was in Sun’s StorEdge™ line of business, leading engineers on software engineering issues for the entire Sun Microsystems StorEdge™ customer base. She then took a critical position running Sun’s Solaris© Operating System after-market engineering group, responsible for Level 5 resolution of the operating system’s fielded performance anomalies. Her purview was to see to timely and inclusive resolution of worldwide functional operations. She subsequently took on a second role of program manager for Sun’s 2-way, 4-way and 8-way CPU servers and workstations. These server sales aggregated to greater than $4B annually with an installed base of > 500,000.
On her own time, Mrs. Tourangeau wrote a provisional patent application on photodiode enhancements using nanotechnology: Diffusive-Noise-Reduced Photodiode/Focal Plane Array, Issued September 15, 2003, No. 60/502,931. 2
In May of 2004, Mrs. Tourangeau was recruited by BAE Systems to fill a critical role as program manager for their next generation infrared camera core for commercial applications. In September of 2005, Mrs. Tourangeau accepted a position as a Program Engineering Manager in BAE’s Information Dominance Group, where she led the engineering teams for several signal intelligence programs. Mrs. Tourangeau worked on Future Combat Systems Air Communications payload programs, followed by three programs for the warfighter which are flying in theatre today: USQ-113 Communications Jammer and ICAP III (Radar Receiver Upgrade) both on the EA-6B and antenna pods for the EA-18G. She also led the engineering bid for the D-CREW (anti-IED system) proposal that was highly competitive and awarded to BAE by the US Army. Over 2000 D-CREW systems were produced and deployed in theatre to mitigate the threat of IEDs. Her final assignment at BAE Systems was as a program engineering manager for the Joint Strike Fighter/F-35 (JSF).
Mrs. Tourangeau worked as a senior program manager for Northrop Grumman Information Systems in Beavercreek, OH. She managed critical legacy system modernization software efforts for the U.S. Navy.
Mrs. Tourangeau currently serves as Executive Director of the RVJ Institute, Center of Excellence for EMSO. In this capacity, she oversees operations for the Institute, handling all aspects of the daily business including legal, finance and accounting, social media, public affairs, and communications. In addition, she serves a dual role for the Institute as Chairman of the Board of Directors. Mrs. Tourangeau is an accomplished writer and public speaker, authoring primarily research, studies, and analyses in Electromagnetic Spectrum Operations (EMSO) for the Department of Defense.