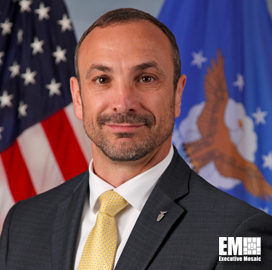 Michael W. Roberts, a member of the Senior Executive Service, is the Director and Program Executive Officer (PEO) for the Space Rapid Capabilities Office (Space RCO), Kirtland Air Force Base, New Mexico. As Space RCO’s senior acquisition officer, Mr. Roberts is responsible for and oversees space-based research, development and acquisition activities for classified space acquisition programs assigned to the Space RCO. In this position, Mr. Roberts serves as the principal advisor to the Secretary of the Air Force and the Chief of Space Operations, United States Space Force for the rapid development and fielding of classified critical space capabilities. In his PEO capacity, he is responsible for a robust portfolio of major acquisition programs providing operationally dominant space capabilities that strategically enhance the Nation’s warfighting capabilities and dominance in the space domain.
Mr. Roberts was appointed to the Senior Executive Service in 2017. In his previous position as the Director for Development and Integration, PEO Information Warfare System (IWS), Mr. Roberts managed the system requirements and resources for combat systems, associated elements, and facilitated the execution of effective systems engineering processes for development, integration, and delivery of Navy Surface Combat System capabilities.
Mr. Roberts’ diverse and challenging career spans 25 years in support of the United States Navy, United States Air Force and United States Space Force as a veteran, engineer and acquisition professional. The past fifteen years, his career focus has been on acquisition, combat and weapon system engineering, design, testing, fielding and sustainment. He has held various senior Program Manager positions within the acquisition community.