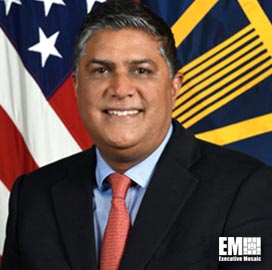 Nand Mulchandani serves as the Chief Technology Officer of the U.S. Department of Defense Joint Artificial Intelligence Center. Mulchandani brings more than 25 years of experience in the technology industry as a serial entrepreneur and senior executive in the enterprise infrastructure and security software industries to his service in the government to help transform the Department of Defense in adopting next-generation AI and software technologies.

Prior to government service, Mulchandani was at the Harvard University John F. Kennedy School of Government and Stanford University’s Graduate School of Business, and remains a non-resident Fellow at Harvard’s Belfer Center for Science and International Affairs. Mulchandani also served as the Vice President of Market Development and Strategy for Citrix, a leading provider of desktop virtualization and networking infrastructure. He joined Citrix through its acquisition of ScaleXtreme, where Mulchandani was the CEO and co-founder. Prior to his tenure at ScaleXtreme, Mulchandani served in various capacities as CEO, co-founder, senior executive, and entrepreneur-in-residence for a number of technology startups and companies including the venture capital firm Accel Partners, OpenDNS (funded by Sequoia Capital and Greylock, acquired by Cisco), VMware, Determina (funded by Bessemer Venture Partners, Mayfield and USVP, acquired by VMware), and Oblix (funded by Kleiner, Perkins, Caufield & Byers, acquired by Oracle). Mulchandani started his career at Sun Microsystems as a compiler architect and holds a patent on dynamic code generation.

Mulchandani holds a Bachelor’s degree in Computer Science & Mathematics from Cornell University, a Master in Science in Management from the Stanford University Graduate School of Business, and a Master of Public Administration from the Kennedy School of Government at Harvard University.