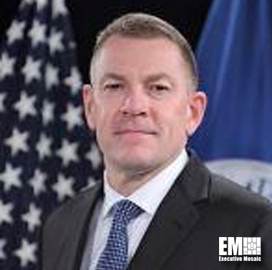 Reporting to the Under Secretary for Management, Richard McComb was appointed to the Senior Executive Service and position of Chief Security Officer (CSO) for the U.S. Department of Homeland Security effective April 3, 2016.

In his role as CSO, Mr. McComb is responsible for security-related programs affecting the more than 235,000 DHS employees that make up the Department. Designated as the Senior Agency Official by the DHS Secretary, Mr. McComb has oversight authorities over all DHS security programs, including those undertaken at all DHS Components. He exercises department-wide security program authorities in the areas of personnel security, physical security and investigations, administrative security, insider threats, identity management, special access programs, and security training and awareness. As Chair of the CSO Council, Mr. McComb partners with all his counterparts in the DHS Components to lead a highly collaborative and uniquely decentralized security program designed to safeguard the Department’s people, property, information, and systems.

Prior to coming to DHS, Mr. McComb served as the Director, Leased Facilities Protection Directorate, Pentagon Force Protection Agency. In this capacity, Mr. McComb had overall responsibility for force protection, security, law enforcement, and emergency management functions for all Department of Defense (DoD) leased and DoD occupied facilities in the National Capital Region (NCR), excluding the Pentagon Reservation. He was the senior security advisor to the Director, Pentagon Force Protection Agency regarding the policies, systems, and procedures designed to ensure the protection of the nearly 22,000 DoD employees occupying the 64 leased facilities located throughout the NCR.

Mr. McComb served over 27 years in the United States Air Force as a Security Forces Officer from which he retired in 2015 as a Colonel. During this time, Mr. McComb held a variety of positions of increasing responsibility including key security and law enforcement staff duty in the Office of the Secretary of Defense and Headquarters Air Force, where he served as the Associate Director of Security Forces. He has served as a Chief of Security Forces four times at the installation level and once at the Major Command level. Mr. McComb also served as the Installation Commander of Joint Base Charleston, South Carolina, one of only 12 DoD joint bases providing full-service installation support for military airlift and sealift operations, 53 multi-service organizations and a base population of more than 40,000 people.

Mr. McComb holds a Bachelor of Science degree from Columbus State University, a Master of Arts in Administrative Management with a public sector concentration from the University of Maryland University College, as well as a Masters in Military Operational Art and Sciences from Air University and a Masters in National Security Strategy from the National War College, National Defense University. He is also a graduate of the Federal Bureau of Investigation's National Academy.