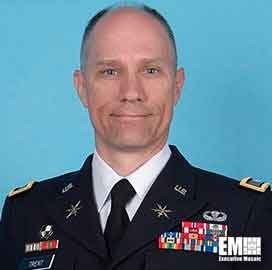 Colonel Stoney Trent, Ph.D. is an Army Cyber Warfare Officer and Cognitive Engineer, currently serving as the Chief of Operations for the Joint Artificial Intelligence Center under the Department of Defense Chief Information Officer. Previously, he established and directed U.S. Cyber Command’s Cyber Immersion Lab, which develops and assesses capabilities for the Cyber Mission Force. While assigned to the Army Staff (G-8), COL Trent served on the Battlespace Awareness Functional Capabilities Board and was responsible for evaluating Defense Intelligence Capabilities for the Joint Requirements Oversight Council. He has served as a Strategic Policy Research Fellow with the RAND Arroyo Center, and Current Operations Officer (J-33) in US Forces Korea. COL Trent is a former Assistant Professor in the Department of Behavioral Science and Leadership at the United States Military Academy. As a military intelligence officer, he deployed twice to Iraq and once to Kosovo, serving as Interrogation Battalion Executive Officer, Military Intelligence Company Commander, and Infantry Battalion Intelligence Officer (S2). COL Trent began his military career as an Armor Officer in Fort Knox, KY. His awards and decorations include the Bronze Star and Defense Meritorious Service Medal. He is a graduate of the Army War College and former Cyber Fellow at the National Security Agency.