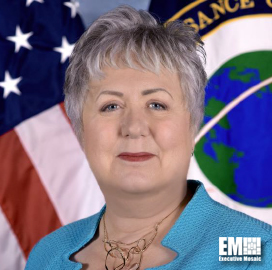 Dr. Durham became the Director, Advanced Systems and Technology Directorate (AS&T), National Reconnaissance Office (NRO), in November 2015 after serving as Deputy Director, AS&T for nearly four years.
Dr. Durham joined the Central Intelligence Agency (CIA) in 2001 directly following a highly successful military career. Having enlisted immediately after high school in 1977, she worked several years as an Aircraft Maintenance Mechanic before earning her commission under the auspices of the Air Force Enlisted Commissioning Program. She went on to serve out a diverse military career which included working as an Orbital Analyst and as a Nuclear Weapons Systems Analyst, as well as leading research programs in Hyperspectral Imaging, Data Fusion, and multiple SPACECAP projects. Dr. Durham’s final assignment was lead of NRO/AS&T’s Problem Centered Research Team before retiring from the United States Air Force in 2001.
Dr. Durham spent 10 years at the CIA’s Directorate of Science and Technology, Intelligence Technology Innovation Center and at the Office of the Chief Scientist. During her early years, she conducted research into Agent-based Modeling, Nanotechnology and Deception Detection. Her most recent tour was as Team Lead of the Technical Support to HUMINT Team where she led a talented group of Agency officers conducting research into a wide variety of mission areas.
Dr. Durham graduated with a Bachelor of Science degree in Physics from Georgia State University, a Master of Science degree in Nuclear Science from the Air Force Institute of Technology, and a Doctorate degree in Physics from the University of New Mexico.