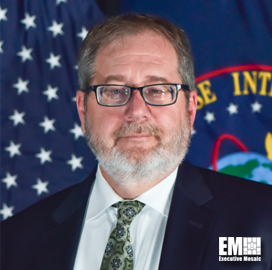 Mr. Busch was appointed as the Defense Intelligence Agency (DIA) Technical Director for MARS (Machine-Assisted Analytic Rapid-Repository System) in April 2018. He provides program development, technical direction, and strategic vision for DIA’s transformational program supporting foundational intelligence to the warfighter. MARS will replace the Modernized Intelligence Database with a new system that is intended to provide far greater capability to the warfighter, DoD, the intelligence community (IC), and our coalition partners. MARS will underpin many of the IC’s advanced technology and artificial intelligence goals providing a flexible data environment that is ready to support our fifth-generation warfighter systems, our machine-to-machine automated operations, and our warfighters with accurate, timely, and relevant mission-ready foundational intelligence.

Prior to his role as Technical Director, Mr. Busch served as Chief Data Officer where he provided oversight, governance, and implementation of DIA’s migration to become a data-centric organization. Mr. Busch has been at DIA since 2004, and previously served as the Division Chief for the Integrated Analysis and Methodologies Division in the Directorate for Analysis, leading the agency’s Foundational Intelligence Modernization effort and innovation in intelligence analysis.

Prior to his role as division chief at DIA, Mr. Busch led a Director of National Intelligence hard target strategy for an IC-wide effort focused on improving collection and analysis gaps leveraging advanced technology and innovative collection to advance the IC’s understanding of hard targets.

Prior his time with DIA, Mr. Busch developed and ran the Airborne Rapid Imaging for Emergency Response program at the Department for Homeland Security. Following the events at the World Trade Center, Mr. Busch was hired to re-engineer airborne-based sensors in order to support the first-responder community in near real-time emergency environments. Mr. Busch, developed a fused sensor environment that directly transmitted electrooptical, light detection, and ranging, and thermal imagery into a platform that transmitted directly from aircraft to emergency operation centers.

Mr. Busch began his career as a Geographer and analyst at Marine Corp Intelligence Agency providing intelligence support to maneuvers for Operation Enduring Freedom and Operation Iraqi Freedom. During his tenure, he developed the Geographically Linked Information and Dissemination Environment program, which provided high volume, finished intelligence via secure networks to deployed and distributed forces.

Mr. Busch lives in Vienna, VA with this wife Linda and their two children.