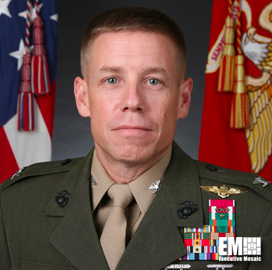 Colonel William L. DePue, Jr. graduated from the US Naval Academy with a Bachelor’s of Science degree in Aerospace Engineering and was commissioned a Second Lieutenant in May 1993. Upon completion of the Basic School, he attended Naval Flight School and in May 1996 was designated a Naval Aviator.

As a First Lieutenant he was assigned to the Red Dragons of HMM-268 at MCAS El Toro, CA in January 1997 where he served as a CH-46E pilot and was promoted to Captain. Captain DePue’s billets with the Red Dragons included Ground Safety Officer, Flightline Officer, Weapons and Tactics Instructor, and Current Operations Officer. In 1998 and 2001 he deployed to WESTPAC with the Aviation Combat Element (ACE) of 11th MEU.

In 2001, Capt DePue was selected to join the Night Hawks of HMX-1, the Presidential Helicopter Squadron. There he was assigned to the Operational Test and Evaluation Department as an MV-22B Operational Test Director.
While assigned with the Night Hawks, he flew Presidential Support missions in
the CH-46E; managed the mission planning system, survivability and maintenance test programs for the MV-22 Program; and attended the US Army’s Operations Research Systems Analysis Course, qualifying him as an Operations Research Specialist.

In the summer of 2003, Major DePue was transferred to the newly formed test squadron VMX-22 at MCAS New River, NC where he was assigned as the Chief Operational Test Analyst. While serving at VMX-22 he was designated an MV-22B pilot and participated in multiple test periods including the final aircraft Operational Evaluation. In September 2005, Major DePue received orders to VMMT-204, the MV-22B Fleet Replacement Squadron. There he served as an Instructor Pilot, the S-1 Officer, and Student Control Officer.

In March of 2006, Major DePue was transferred to VMM-263 for the first fleet MV-22B squadron transition where he served as the Assistant Operations Officer and 2d Marine Aircraft Wing (FWD) Weapons and Tactics Instructor/MV- 22 Transition Officer during Operation Iraqi Freedom (OIF). Following OIF, Maj DePue became the Executive Officer for VMM-263 and subsequently deployed with the 22nd Expeditionary Unit.

In February, 2010 Lieutenant Colonel DePue rejoined the Argonauts of VMX-22 at MCAS New River serving as the Lead MV-22 Operational Test Director and the Chief Operational Test Director. During this assignment he oversaw a variety of operational test activities on the MV-22B, CH-53E and F-35B. In January 2012, LtCol DePue transferred to MAG-36 where he worked as the MV-22B Transition Officer, planning the introduction of the Osprey to Okinawa.

In June, 2012 LtCol DePue assumed command of HMM-265. In September 2012 the “Dragons” were redesignated from HMM-265 to VMM-265, transitioning from the CH-46E Sea Knight to the MV-22 Osprey and introducing the Osprey to the WESTPAC AOR. During his tenure as the CO, the Dragons participated in multilateral exercises in the Republic of the Philippines, the Kingdom of Thailand, the Republic of Korea, and Japan. As the Aviation Combat Element of the 31st MEU the squadron participated in Theater Security Cooperation exercises in Australia and Korea and provided humanitarian relief to the Philippines in support of Operation Damayan following Typhoon Haiyan.

Following command LtCol DePue was assigned to the Headquarters Marine Corps Office of Legislative Affairs as a Congressional Liaison for Acquisition Programs. He was promoted to the rank of Colonel in February 2016. In June of 2016, Col DePue returned to Okinawa where he took command of Headquarters and Support Battalion, Marine Corps Installations Pacific (MCIPAC) which included the responsibility of Camp Commander for Camp Foster and Camp Lester.

In June 2018, Col DePue relinquished command of H&S Battalion and became the Director of the Defense Policy Review Initiative (DPRI) for MCIPAC, responsible for the planning, budgeting and execution of construction projects in support of the US/Japan bilateral agreement to close MCAS Futenma and relocate approximately 10,000 Marines off of Okinawa. In October, 2019 Col DePue was reassigned as the Command Inspector General, MCIPAC. In July 2020, Col DePue transferred to the Office of Naval Research where he currently serves as the Expeditionary Portfolio Director.