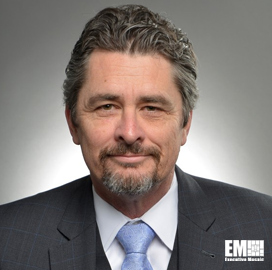 Jones previously served as sector VP and general manager of the airborne sensors and networks division of Northrop Grumman’s mission systems business unit. In that position, Jones was in charge of a range of command, control, communications, computers, intelligence, surveillance and reconnaissance capabilities, Northrop said.

He also served as sector VP and general manager of the advanced concepts and technologies division, also within the mission systems unit. In that capacity, Jones led the development of advanced systems solutions.

Before joining Northrop Grumman in 2011, Jones was the director of Boeing’s marine systems division, headquartered in Anaheim, California. He was in charge of a wide range of high technology, including undersea systems solutions.

Prior to Boeing, he held various leadership roles of increasing responsibility at Rockwell International.